A rock crusher is a piece of equipment designed to take large rocks as input (Feed) and produce small rocks, gravel or rock dust as output. They are used to produce rock fill material for such uses as landscaping and erosion control.

They are typically very large, very loud, and produce a considerable quantity of dust, which can be controlled with sound panels, water curtains, enclosures and rubber mounted over the steel, but often are not for economic reasons. Most installations are therefore in rural areas, but environmental considerations and regulations are reducing this location advantage.

As a basic rule, jaw crushers are the primary crusher taking the mined aggregate and reducing it to a size that a cone crusher can accept. Cone crushers tend to be the secondary crusher, and usually produce material of a size needed for many industry applications such as the aggregates needed for asphalt and concrete production.

For the most part advances in crusher design have moved slowly. Jaw crushers have remained virtually unchanged for sixty years. More reliability and higher production have been added to basic cone crusher designs that have also remained largely unchanged. For instance, a 48 inch cone crusher manufactured in 1960 may be able to produce 170 tons/hr of crushed rock, whereas the same size cone manufactured today may produce 300 tons/hr. These production improvements come from a number of engineering changes, but a large part is due to better crushing chamber design.

The largest advance in cone crusher reliability has been seen in the use of hydraulics to protect crushers from damage due to uncrushable objects entering the crushing chamber. Foreign objects, such as steel, have been known to cost thousands of dollars of damage to a cone crusher, and more costs in lost production. The advance of hydraulic relief systems has greatly reduced downtime and improved the life of these machines. 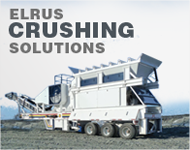 Want these articles in your inbox?

Get tips, ELRUS news and other happenings in the aggregates industry sent right to your inbox.

Remember, you can always easily unsubscribe any time you want.